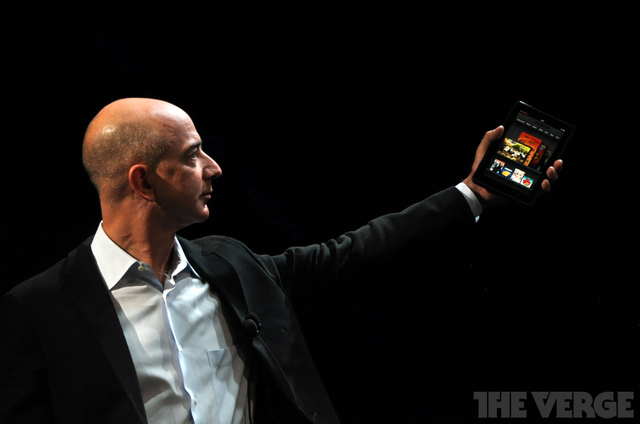 Jeff Bezos, the founder of Amazon and the world’s 19th-richest man, has acquired The Washington Post, long one of the country’s most influential and prestigious daily newspapers, for $250 million in cash, the company announced today. “The purchaser is an entity that belongs to Mr. Bezos in his individual capacity and is not Amazon.com, Inc.,” a press release issued by The Washington Post said. The purchase includes all of the papers The Washington Post owns (and their websites), including the Express daily, The Gazette Newspapers, and the Southern Maryland Newspapers, but does not include Slate, TheRoot.com or Foreign Policy, which will remain with the Washington Post Company.

Last week, Bezos sold about $185 million worth of Amazon shares, though it’s unclear whether the sale is connected to the acquisition.

Now former owner Katharine Weymouth says in a statement that she has agreed to stay on as both publisher and CEO of the Post.

By acquiring a cornerstone of Washington DC media, Bezos had immediately become a player in the nation’s capital and expands his already significant profile in the media world. Founded 136 years ago, the Post is best known for its reporting on the Watergate scandal, which led to the resignation of US President Richard Nixon in 1974. That story elevated the publication from a well-respected regional daily paper to an internationally recognized news organization.

“The purchaser is an entity that belongs to Mr. Bezos… and is not Amazon.com.”

At first glance, the deal looks like a natural extension of Amazon’s media strategy. Much has been made of Bezos’ and Amazon’s increasing desire to become major media producers. In recent years, Amazon has become an ebook publisher and enabled authors to self publish. The company created a film studio to supply Amazon Instant Video with original TV shows and movies. But speculation over what Amazon may have planned for a general newspaper should be tempered by the fact that the acquisition was not made by Amazon, but by Bezos personally.

In a memo to the staff of the Washington Post, Bezos praised the previous owners, saying, “I would highlight two kinds of courage the Grahams have shown as owners that I hope to channel. The first is the courage to say wait, be sure, slow down, get another source. Real people and their reputations, livelihoods and families are at stake. The second is the courage to say follow the story, no matter the cost.” He also added, “I won’t be leading The Washington Post day-to-day. I am happily living in ‘the other Washington’ where I have a day job that I love. Besides that, the Post already has an excellent leadership team that knows much more about the news business than I do, and I’m extremely grateful to them for agreeing to stay on.”

Bezos is taking over the Post during a dark period for the publication and for newspapers in general. The Post has hemorrhaged readers and revenue for many years. Last week, the Washington Post Company reported an operating loss of $49.3 million in the first six months of 2013, compared to a $33.2 million loss for the same period a year earlier, a 14 percent decline. At close of trading on Friday, the company’s stock price was up $10, or 2 percent to $559 per share.

The New York Times announced last weekend that it had sold The Boston Globe for $70 million in cash. The Times, which paid $1.1 billion 20 years ago for the daily newspaper, had hoped to get $100 million.

The past decade has been a period of painful belt-tightening at the Post that included the closing of overseas news bureaus, a general scaling back of coverage, and numerous rounds of employee buyouts. The paper was at one time regarded as a peer of The New York Times and The Wall Street Journal. In the mid-1990s, the Post’s weekday circulation topped 750,000 readers but has since fallen to 474,000. In addition, the newspaper has struggled to maintain its status as the go-to outlet for national politics against scrappy blogs and news organizations with far less overhead, such as Politico and The Huffington Post. In the past two years, the Post’s uncertain future has led to an exodus of many of its top writers.

According to Forbes, Bezos has a personal net worth of $25 billion. Through Bezos Expeditions, he invested in at least two dozen companies, including Twitter, Uber, and Blue Origin, the commercial spaceflight company he founded, according to Bezos Expeditions’ website. In April, Bezos Expeditions led a $5 million round of funding into online news blog Business Insider. Thus far, those investments have played little if any role in forwarding Amazon’s agenda. Then, what does this second investment in a news organization mean? Does Bezos want to be Rupert Murdoch?

When that investment was announced, Bezos told Brad Stone of Businessweek that he saw an opportunity in how technology is streamlining news distribution and cutting out middlemen. Even “well-meaning gatekeepers slow innovation,” Bezos told the magazine. According to Stone, Bezos is a fan of email newsletters that are “short, well written, and are delivered right to readers via email with minimal fuss and no expense.”

It’s hard to conceive of someone repackaging the Post into an outlet for bite-size news stories. The newspaper has won 47 Pulitzer Prizes and the brand is associated with long-form investigative journalism. But that’s the direction print journalism has been headed for years, and there’s no denying the Post is a much more diminished version of itself than the one immortalized in the Robert Redford film All The President’s Men.

Still, the acquisition of the Post should give Bezos greater access to power. The paper was purchased in 1933 by Eugene Meyer and it’s been in his family ever since. Under the leadership of Katharine Graham, Meyer’s daughter, the paper had a part in publishing the Pentagon Papers, and it was her decision to back Bob Woodward and Carl Bernstein’s reporting on Watergate. She became the doyenne of Washington’s social scene and the paper allowed her to cultivate friendships with Presidents John F. Kennedy, Lyndon B. Johnson, and Ronald Reagan.

After Katharine Graham died in 2001, the company was turned over to Donald Graham, one of her sons. In 2008, his niece Katharine Weymouth, 47, was made publisher. Oddly enough, the Times profiled Weymouth last week and she sounded as if she was settling in for the long haul. “I don’t feel like my job is to be beloved,” Weymouth was quoted saying in the story. “I certainly hope to be a great publisher, and if people want to love me, too, that’s even better.”

Weymouth will stay on as the Post’s publisher, according to today’s announcement.

For his part, Bezos hasn’t shown much of an interest in wielding the kind of power that the Post might supply him. A libertarian, Bezos has contributed relatively small sums to both major political parties. Last year, the CEO and his wife donated $2.5 million to a group trying to get a same-sex marriage law passed in Washington. And interestingly enough, Amazon scored a coup last week when President Barack Obama agreed to give a speech at one of the company’s warehouses.

As for Amazon, the retailer is plenty concerned with several political issues, key among them the debate over taxing online retailers. Many suspect that Amazon spurred the government to investigate five of the top six book publishers as well as Apple for fixing ebook prices, a move that forced Amazon to stop discounting ebooks. The feds sued and the publishers paid a $160 million settlement. Apple fought in court but last month was found liable for antitrust violations.

So sure, Bezos is now the owner of the Post, but having a CEO who’s a big shot in Washington certainly won’t hurt.