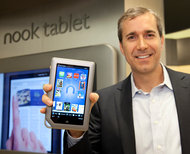 Jim Sulley/Barnes & Noble, via NewscastWilliam Lynch, Barnes & Noble’s chief executive, shows off the Nook tablet at a bookstore in Manhattan.

Shares of Barnes & Noble skyrocketed in early trading on Thursday after a report said Microsoft was offering $1 billion for the digital assets of the bookseller’s e-reader business.

Investors appeared encouraged by signs that there might be a deal for the digital arm of Nook Media. The report appeared on the technology blog TechCrunch, which cited internal Microsoft documents.

Microsoft already owns about 17.6 percent of the Nook division, having paid $300 million last year. According to TechCrunch, the company would seek to take over the unit’s e-books and devices operations.

The Nook business would then focus on selling through apps on “third party” devices.

A person briefed on the matter confirmed the authenticity of the documents, but added that they appeared to be at least several weeks old. It is not clear what Microsoft’s current thinking is or whether it will reach a deal with Barnes & Noble.

This person cautioned that any such transaction was at least several weeks away.

By consummating deals with Mr. Riggio and Microsoft, Barnes & Noble could effectively sell off its most viable businesses at a time when both face significant challenges.

A spokeswoman for Barnes & Noble declined to comment. A representative for Microsoft was not immediately available for comment.

In December, Pearson, the British educational publisher and owner of The Financial Times, agreed to acquire a 5 percent stake in Nook Media. That investment valued Nook Media in its entirety at nearly $1.8 billion.

McGraw-Hill Education and ePals® Join Forces to Expand Global Collaborative...How 12 Countries Spend Education Money (And If It Makes A Difference)
Scroll to top