Faculty members at many institutions have been caught in a mad dash to enhance their courses with on-line materials and activities for students. Some professors have taken a do-it-yourself approach, designing their own World-Wide Web pages from the ground up. But now a cottage industry, made up of software developers, academic technologists, and instructors, has sprung up to help faculty members put their courses on line without having to learn intricate page-coding schemes.

For professors who have decided to do so, that new industry offers a dizzying array of tools for developing Web courses. Of the dozen or so leading software packages, some require the use of expensive servers and the support of an information-services department, while others are designed to let professors create on-line course materials with little or no support. Some of the programs allow users to incorporate features such as simultaneous on-line conversations and timed on-line quizzes, but others stick to such simpler tasks as providing course materials and lecture notes.

Brenda Sugrue, a professor of instructional design at the University of Iowa, helped select software for her university’s Web-based courses last spring. She says her primary concerns in choosing programs were the ease of use, for both students and professors; the availability of technical support from the software company; and the ability to track students’ use of on-line quizzes and readings. “We were looking for something that wouldn’t be tailored for any particular subject matter, but would be very broad and for general use,” Dr. Sugrue says. She and her colleagues investigated several options before settling on WebCT, a system that is now used by professors campuswide.

William D. Milheim, a professor of education at Pennsylvania State University’s Great Valley Graduate Center, adds that faculty members should look for a system that works well on all computer platforms and that provides security features to control who may gain access to the on-line course.

He says professors should also consider whether they want an asynchronous classroom environment, where students send and read information on their own schedules, or a synchronous one, which permits real-time interaction. He says synchronous systems are most important in courses that exist only on line, because students otherwise would have no real-time contact with their professors and classmates.

Dr. Milheim, who conducts research on computer- and Web-based teaching systems, has created a Web site to help professors decide how best to put their courses on line. It contains links to dozens of research papers and Web sites that deal with various issues of developing Web-based courses. His site also offers instructions and tools for professors who want to create Web courses on their own using hypertext markup language, or H.T.M.L., the set of codes used to create Web pages.

But the central selling point of most of the software packages is that they allow faculty members to create Web pages for their courses without needing to know H.T.M.L. Professors simply fill in the blanks, and the program produces a Web site. Dr. Milheim warns, however, that the programs can be limiting: The course templates they provide might not exactly match the way professors want to teach.

He also says that the pages can have a cookie-cutter look. “The good side of that is that it’s easier for the faculty member to develop it,” he says. “You’ve got 10 templates to choose from — pick one. It probably doesn’t matter to the student in the long run what that template looks like.”

The design of most course-development tools makes them easy on university technologists as well. Most of the tools require no special software for professors or students, relying only on conventional Web browsers. The software typically runs on standard Web servers, with Unix or Windows operating systems. Some software vendors will offer the use of their own servers to professors who do not have access to a university network.

The programs are generally priced according to how many courses an institution wants to put on line, how many students will take the course, and whether the institution prefers to purchase the software outright or to pay to use it for a set time. For example, the TopClass program costs $750 for a class of 25 to use it for one year. For a few hundred dollars more, an institution can buy the permanent use of the program.

Researchers of the Web-course market say that professors may also want to consider the origin of their course-building tool. Is it designed and supported by a professional software-development company, or was it created as part of a research project at another university?

Stephen Gilfus, is Vice President of Marketing and a company co-founder of CourseInfo, a company that produces a popular Web-course tool of the same name, argues for the benefits of choosing a commercial product. “As a commercial company we have the opportunity to cater to the broader need fo educational institutions while keeping up with technology. ,” he says. “Being a private organization allows us to focus on the various needs of academic institutions gives us the advantage of being able to move quickly.”,” Software companies have an added pressure to produce quality programs”, he says: “Providing excellent technology combined with strong customer service.”

But Iowa’s Dr. Sugrue is glad to have a course tool that was designed on a college campus. WebCT, the program she uses, was created at the University of British Columbia by a computer scientist. “It’s tailored for the kind of teaching we do at universities,” she says. “Faculty members seem to be very comfortable with the way it’s organized.”

The program’s creator, Murray W. Goldberg, says university-based software developers “at least have some idea what it’s like to teach in a university setting.” While developing WebCT, he says, he received valuable feedback from colleagues who tried the program, and he was able to test it in his own classes.

Dr. Goldberg says faculty members should keep the programs’ overall capabilities in mind as they consider possible purchases. He says professors tend to want more and more features as they get comfortable with on-line teaching. “You want to make sure that whatever you choose has the features you want now and those you will eventually want,” he says.

To help professors make the best choices, many institutions have formed committees or appointed researchers to make recommendations. When professors at the University of Manitoba began requesting Web-course tools last year, the university conducted a study of several popular programs. Colin Angel, one of the project’s leaders, notes that many of the tools share one shortcoming: the lack of “a course-development model.” Mr. Angel says that most programs help professors convert their courses to on-line form, but offer no guidance on wider issues of course design.

Some of the tools many universities are using or considering using: 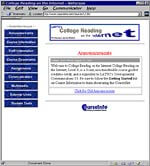 CourseInfo was created by Stephen Gilfus and Danile Cane at Cornell University and is entirely Web-based, allowing professors to create courses by filling in forms on a Web page. Students also gain access to the courses through their Web browsers. Professors may customize their on-line classrooms by manipulating color schemes and buttons, and may place images and audio files on their pages. CourseInfo requires special server software that can be run on an institution’s computer network or, for an additional fee, by the CourseInfo company. Professors can create a sample course on the company’s Web site.

TopClass is a Web-based system that uses a data base to store information about each classand student. The server software creates Web pages on the fly as students ask for them, making it easier for professors to modify their on-line materials. Professors can download a free evaluation copy of the program that will allow them to create a course for up to four students. The program, which is intended not only for creating on-line college courses, but also as a training tool for technical and corporate workers, was chosen by PCWeek magazine as the best such Web-training tool. 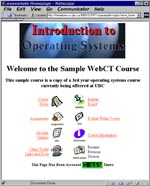 WebCT runs on a central server, and both professors and students use the on-line course materials through their Web browsers. Professors may modify the Web pages by adding their own H.T.M.L. code. The program’s Web site features examples of on-line classes and allows visitors to use the software to create sample courses.

Those programs are only a few of the tools available to institutions and faculty members. Most colleges are interested in software that can be used by professors in any discipline, but some of the available programs are tailored to specific subjects, such as physics or mathematics. Others focus on helping professors create specific features, such as discussion forums, but aren’t designed as all-in-one course builders.