HASBROUCK HEIGHTS — When eighth-graders take their first year of algebra next month, they will solve equations and plot linear graphs with a popular and intriguing tool — an iPad2. 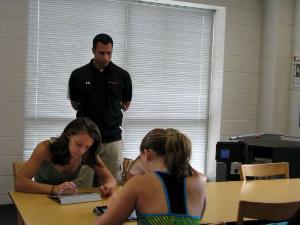 One of the district’s two eighth-grade honors classes will use HMH Fuse, an algebra-based textbook, as part of its curriculum — a pilot program the district plans to expand.

Educators see the application, which intertwines today’s technology with algebraic concepts, as a tool to help kids visualize and internalize calculations and mathematical theory the way they pick up and retain other complicated capabilities using the device’s touch screen.

“It’s the future of computing. The technology of hand computing seems to be the direction computing is going and data shows that,” said Superintendent Michael Porto. “Apple has demonstrated that the iPad has been the top-selling technological product, even more than the iPhone.”

Developed by educational publisher Houghton Mifflin Harcourt, the district will become one of the first in the state to launch the digital platform after being showcased at a seminar in Montclair earlier this year, he said.

The district is leasing the iPads from Apple Inc. for three years at a fraction of what it would cost to purchase them, with the option of renewing and receiving new equipment and software, Porto said.

With the iPads’ flexibility as both a computer and hand-held workbook, educators see the device as a useful tool in the classroom and a study aid students can use at home.

About 90 students last month participated in an enrichment program using the platform’s capabilities, which enables teachers to give step-by-step calculations, demonstrate visual results and pinpoint miscues — all with a swipe of a finger on the smart board.

“You’re tying in the touch,” said Linda Simmons, principal of the 418-student middle school. “Now you’re seeing it, hearing it and feeling what you’re doing.”

There is also scratch pad with which students can write and compute equations the old-fashioned way and a video function that gives on-the-spot instruction from a pre-recorded teacher who coaches kids when they get stumped on a problem.

While Joseph Mastropietro, a teacher, often used a smart-board linked to an iPad to explain applications and equations as he gave last month’s class, he often had time to give one-on-one instructions to others.

“It keeps the students, from the very first second, engaged in the entire lesson,” Mastropietro said. “Honestly, the students can’t wait to use the iPads and do problems. I have students doing more problems now because it’s right at their fingertips.”

That convenience had several students eager to do more problems.

“It makes it easier and fun at the same time,” said Caela Garden, 12, a seventh-grader. “Usually, you have to do the calculations with a paper and pencil. Now you just type in the numbers and it comes up for you.”