Update | 11:08 p.m. Read an article by Steve Lohr on keeping abreast of innovation in the Continuing Education special section.

A recent 93-page report on online education, conducted by SRI International for the Department of Education, has a starchy academic title, but a most intriguing conclusion: “On average, students in online learning conditions performed better than those receiving face-to-face instruction.” 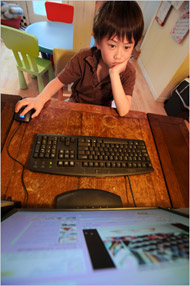 Noah Berger for The New York Times Tyler Kennedy, 9, searches the Web at home in California.

The report examined the comparative research on online versus traditional classroom teaching from 1996 to 2008. Some of it was in K-12 settings, but most of the comparative studies were done in colleges and adult continuing-education programs of various kinds, from medical training to the military.

Over the 12-year span, the report found 99 studies in which there were quantitative comparisons of online and classroom performance for the same courses. The analysis for the Department of Education found that, on average, students doing some or all of the course online would rank in the 59th percentile in tested performance, compared with the average classroom student scoring in the 50th percentile. That is a modest but statistically meaningful difference.

“The study’s major significance lies in demonstrating that online learning today is not just better than nothing — it actually tends to be better than conventional instruction,” said Barbara Means, the study’s lead author and an educational psychologist at SRI International.

This hardly means that we’ll be saying good-bye to classrooms. But the report does suggest that online education could be set to expand sharply over the next few years, as evidence mounts of its value.

Until fairly recently, online education amounted to little more than electronic versions of the old-line correspondence courses. That has really changed with arrival of Web-based video, instant messaging and collaboration tools.

The real promise of online education, experts say, is providing learning experiences that are more tailored to individual students than is possible in classrooms. That enables more “learning by doing,” which many students find more engaging and useful.

“We are at an inflection point in online education,” said Philip R. Regier, the dean of Arizona State University’s Online and Extended Campus program.

But Mr. Regier also thinks online education will continue to make further inroads in transforming college campuses as well. Universities — and many K-12 schools — now widely use online learning management systems, like Blackboard or the open-source Moodle. But that is mostly for posting assignments, reading lists, and class schedules and hosting some Web discussion boards.

Mr. Regier sees things evolving fairly rapidly, accelerated by the increasing use of social networking technology. More and more, students will help and teach each other, he said. For example, it will be assumed that college students know the basics of calculus, and the classroom time will focus on applying the math to real-world problems — perhaps in exploring the physics of climate change or modeling trends in stock prices, he said.

“The technology will be used to create learning communities among students in new ways,” Mr. Regier said. “People are correct when they say online education will take things out the classroom. But they are wrong, I think, when they assume it will make learning an independent, personal activity. Learning has to occur in a community.”