Blog - Latest News
You are here: Home1 / Industry News2 / Universities are bringing Occupy into the classroom

The Occupy movement is starting to set up camp in university course catalogs, syllabuses and classrooms. There are new course offerings and a new focus in older ones. 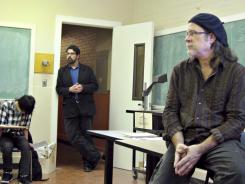 Professor Jeff Edwards, who is teaching “Occupy Everywhere” at Roosevelt University in Chicago this semester, says a third of the political science majors there are enrolled in the course.

Roosevelt allows professors to teach a class one time before the official approval process as long as the department approves it, Edwards says. In his view, the Occupy movement, which started in September near New York City’s Wall Street as a protest against economic inequality, is having enough of an impact on American culture to stand alone in its own course.

“This movement is playing out in front of us and I thought it would be negligent if I didn’t create a space for our students to evaluate it,” Edwards says.

Several other universities have also moved quickly to fashion Occupy courses this semester:

•Brown University visiting assistant professor Derek Seidman created a seminar: “The Occupy Movement in Historical Context” after an Occupy teach-in at the University in October attracted about 600 people.

•UC San Diego professor Ivan Evans’ course “Social Movements” is zeroing in on the Occupy movement this semester. “Now we focus on the organization and structure of social movements because of Occupy’s unique model,” Evans says.

•New York University is offering “Cultures and Economies: Why Occupy Wall Street? The History and Politics of Debt and Finance” taught by professor Lisa Duggan.

Roosevelt student Anna Gurevich, 19, has gotten a “mixed bag” of reactions when she talks to people about taking the course.

“You get people who laugh it off and say, ‘that’s not a college course’ or ‘that’s silly,’ ” Gurevich says. “Some people say it should just be part of another course on social movements, but a lot of people think it’s a very good course offering.”

“I just cannot support a university such as Roosevelt that teaches students on OWS,” counters Roosevelt alumni and Occupy movement opponent David Lempke. “The youth should not study a group of individuals that seem to enjoy causing trouble more than spreading political beliefs.”

An Occupy course was listed to be available this spring on the website of Columbia University in New York City, but it did not run because it hadn’t gone through the approval process, says Vice President for Public Affairs Brian Connolly. Connolly says it had nothing to do with the content of the course and that a class of that nature is something that Columbia would consider for the future.